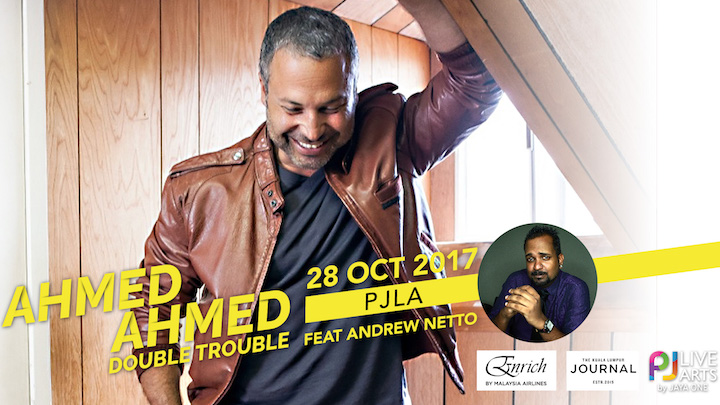 Egyptian-American actor, comedian, producer, and director Ahmed Ahmed is one of the most diverse, multi-faceted talents in the entertainment industry today. His one mission - to prove that humour can breach cultural barriers. Thus Malaysia is one of Ahmed Ahmed’s destinations as he embarks on his world tour. Featuring locally reknown comedian, Andrew Netto, the show aptly called Double Trouble happens 27 October 2017 in PJ Live Arts by Jaya One. 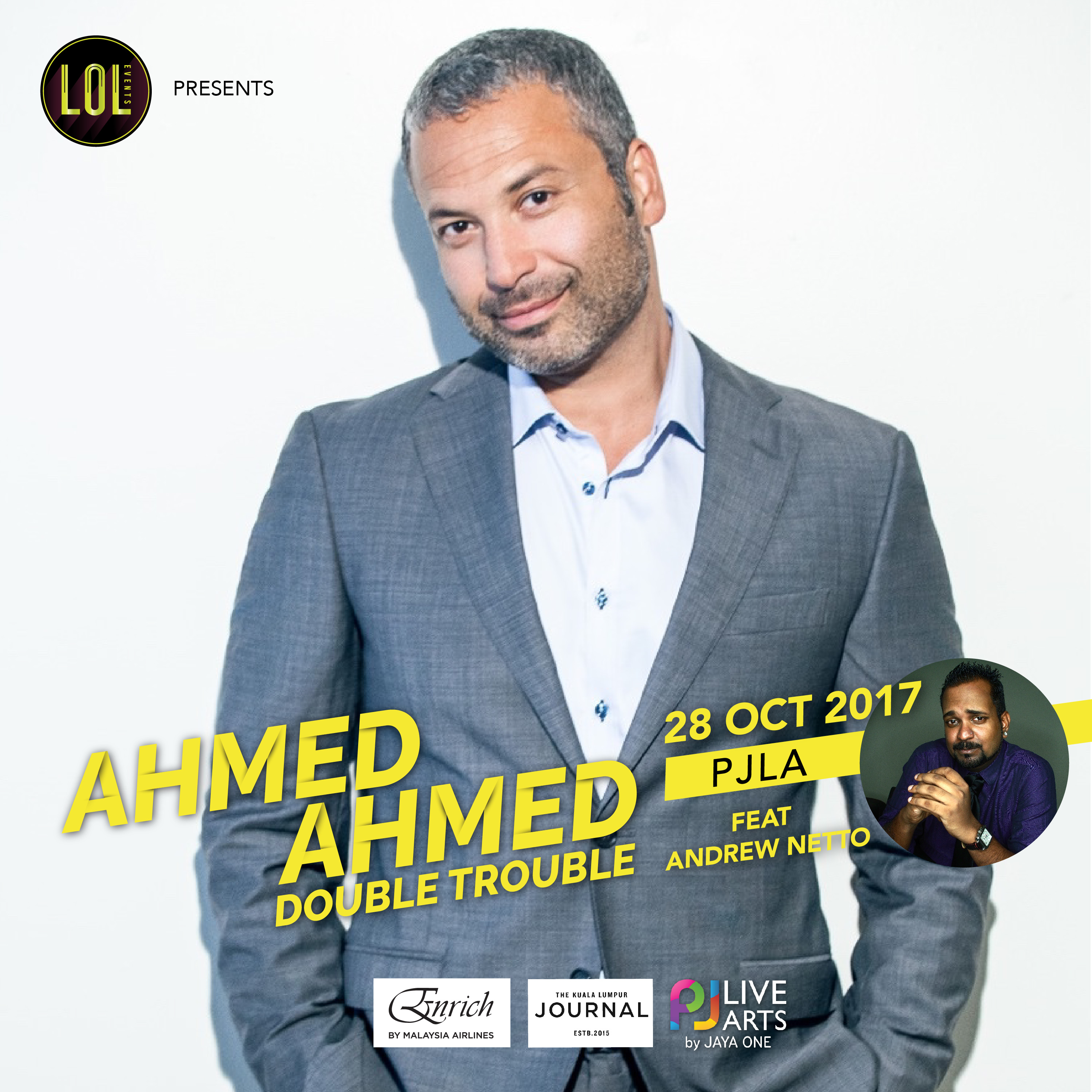 Ahmed Ahmed blends cultural identity and comedy in a stand up-act that allows audiences to laugh at themselves and appreciate others. He is an avid proponent of bridging the divide between the Middle East and West through comedy. Audiences will be entertained with stories of growing up in a immigrant household, the struggles of breaking stereotypes post 9/11 and his journey into making his name known in the Mecca of the Entertainment World. There isn’t a doubt that Ahmed makes BIG impacts on stage. His observations on race relations, Islamaphobia and the Arab-American experience resonates with crowds.

Ahmed gained fame with the Axis of Evil Comedy Tour, a highly acclaimed comedy tour aimed to stop prejudice towards Middle Easterner thorough a comedic approach. He can be seen starring as “Ahmed” on TBS’ hit comedy series Sullivan & Son, produced by comedian Vince Vaughn. Ahmed’s first big break was in the suspense, action film Executive Decision alongside Kurt Russell, Steven Segal, and Halle Berry. He then went on to appear in a handful of blockbuster and cult hit features including Swingers, Iron Man, and You Don’t Mess With The Zohan.

In 2011, Ahmed made his directorial debut with his groundbreaking documentary Just Like Us, a celebration of culture and comedy, that follows Ahmed and ten American comedians through Dubai, Egypt, Lebanon, and Saudi Arabia, performing in front of over 20,000 Arabs and Muslims across the region. The film premiered at Tribeca Film Festival, and went on to be selected at 30 international film festivals, winning several “Best Director” and “Best Documentary” awards. Ahmed was invited to The White House to meet President Obama, and later Hilary Clinton- as they commended him on creating a project that made an effort to break down barriers and encourage cross-cultural dialogue.

Ahmed is currently a paid regular performer at the world famous Comedy Story in Hollywood, The Laugh Factory, and the Comedy Cellar in New York City. He is a true believer that laughter heals, and that comedy can bridge the gap between communities across the world. The Double Trouble show in Malaysia is sponsored by Enrich by Malaysia Airlines as an Official Airline Loyalty Partner and The Kuala Lumpur Journal Hotel as the Official Hotel. Trust us the show will be the bomb! (Not literally).

Check him out on: https://www.facebook.com/ahmedahmedcomedy

Enrich Promo:
Enrich as the Official Airline Loyalty Partner for the show is giving its members a special 15% discount
off tickets for selected shows with LOL Events. To sign up for Enrich, go to
www.enrich.malaysiaairlines.com. Sign up is free! 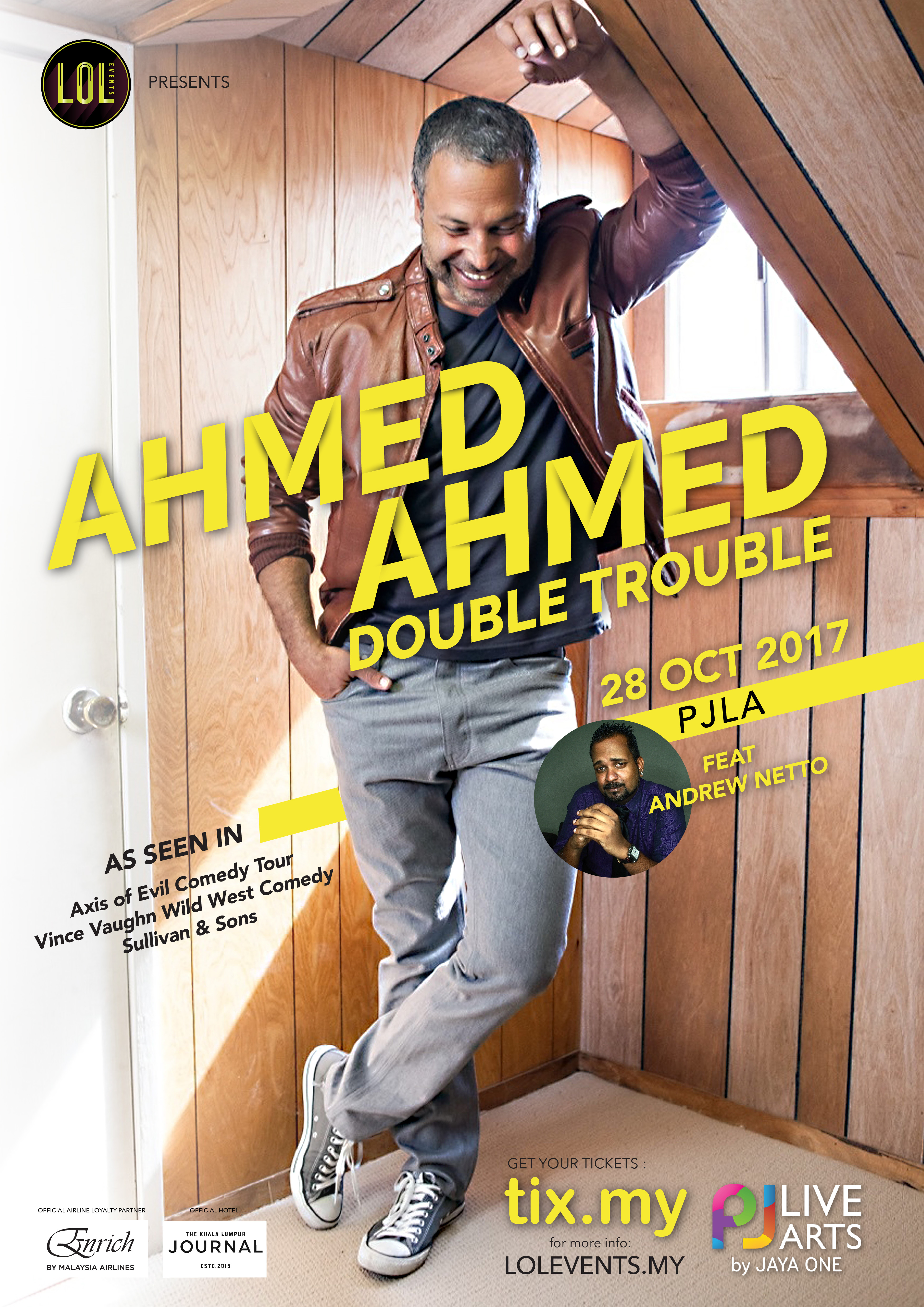 Where : PJ Live Arts by Jaya One