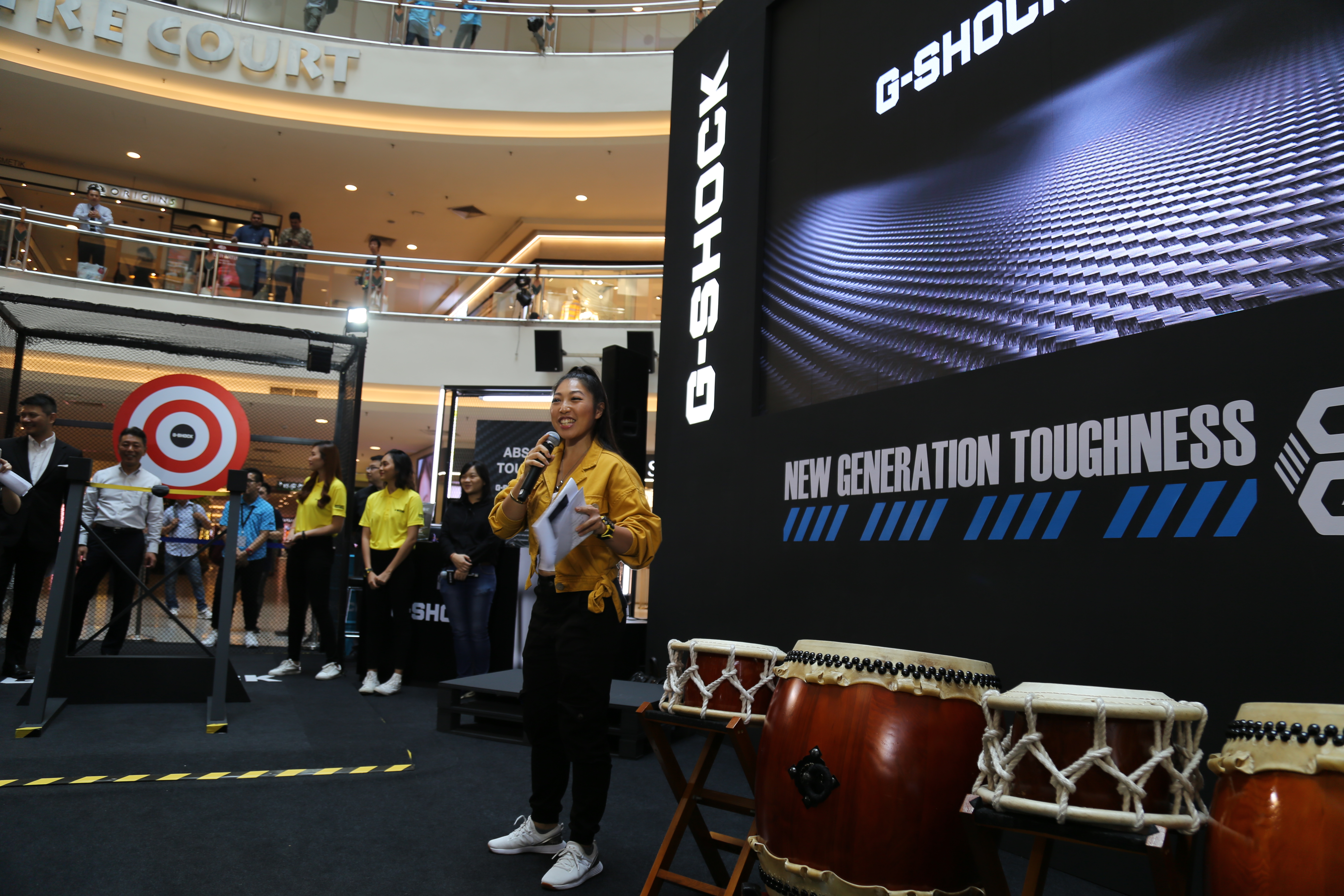 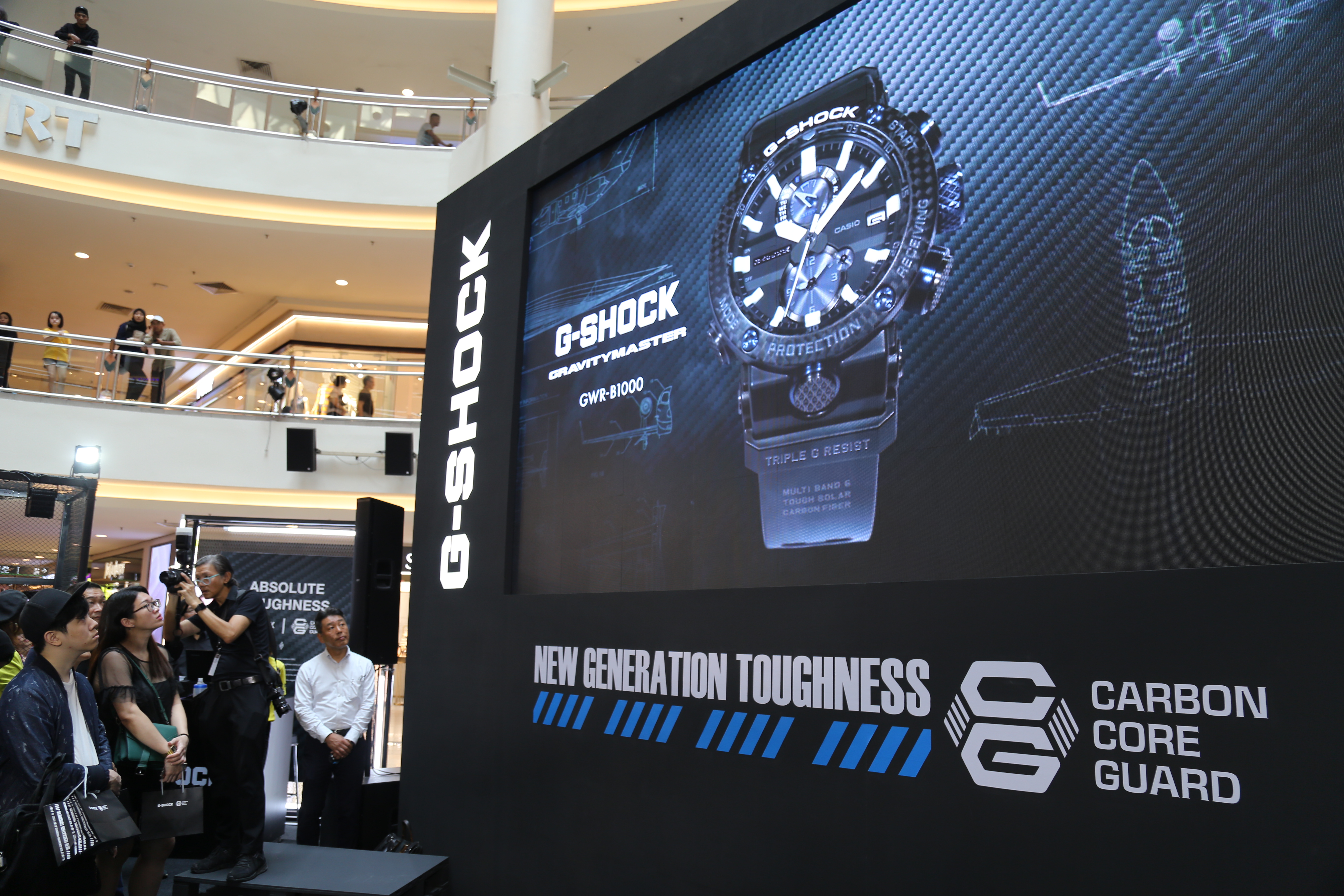 Introduce the latest innovation from Casio's G-Shock line up , Casio Malaysia will hold a week long exhibition at the Centre Court (CCGF) Mid Valley Megamall from 8th April -14th April 2019 to showcase the Carbon G-SHOCK of 2019 featuring a carbon fiber also known as the “ third generation of toughness”.

To kick-off the exhibition, a grand launch was held on 11thApril 2019. Two new carbon series, the GA-2000 and GWR-B1000 Gravitymaster both employing the Carbon Core Guard structure were introduced at the launch for the first time in Malaysia. To signify the official launch of the event, VIPs were tasked with throwing a G-SHOCK watch towards a bullseye target followed by an explosive and upbeat Japanese drum performance by an entourage of highly energetic drummers.

Taking Casio’s G-SHOCK ultra tough reputation to the next level and sporting a new urban outdoor style with a sleeker look, the analog-digital GA-2000 with carbon Core Guard structure includes notable features such as a carbon fiber-reinforced case, guardless buttons, front light button, a double case back structure, and multi –color resin bands. Another unique feature of the GA-2000 is that unlike other G-SHOCKs the bands can lay completely flat with the case and are easily removable using a slide lever without special tools. The new shock resistant structure marks an important advance of G-SHOCK core technology, making this model the new standard bearer of the G-SHOCK lineup. 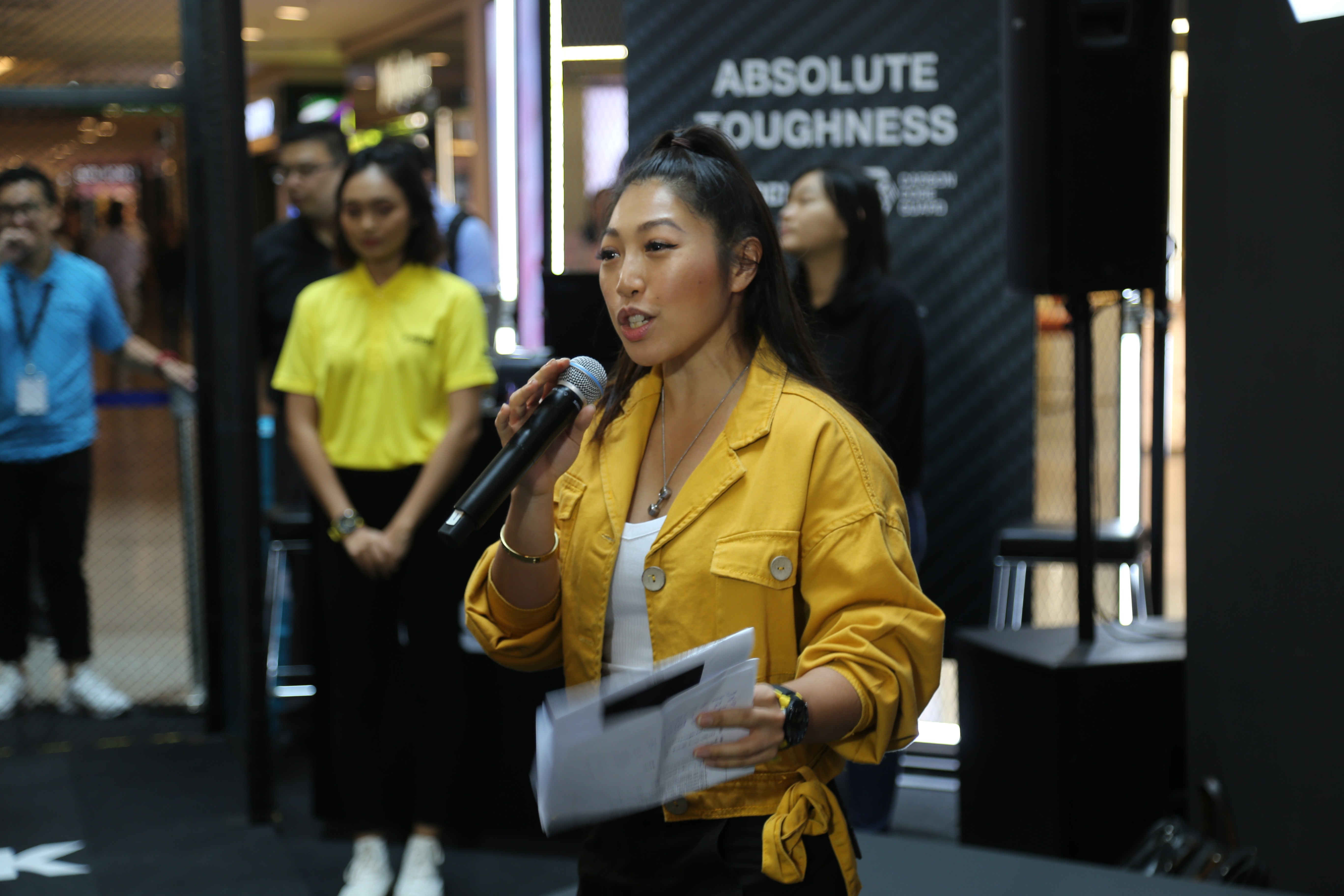 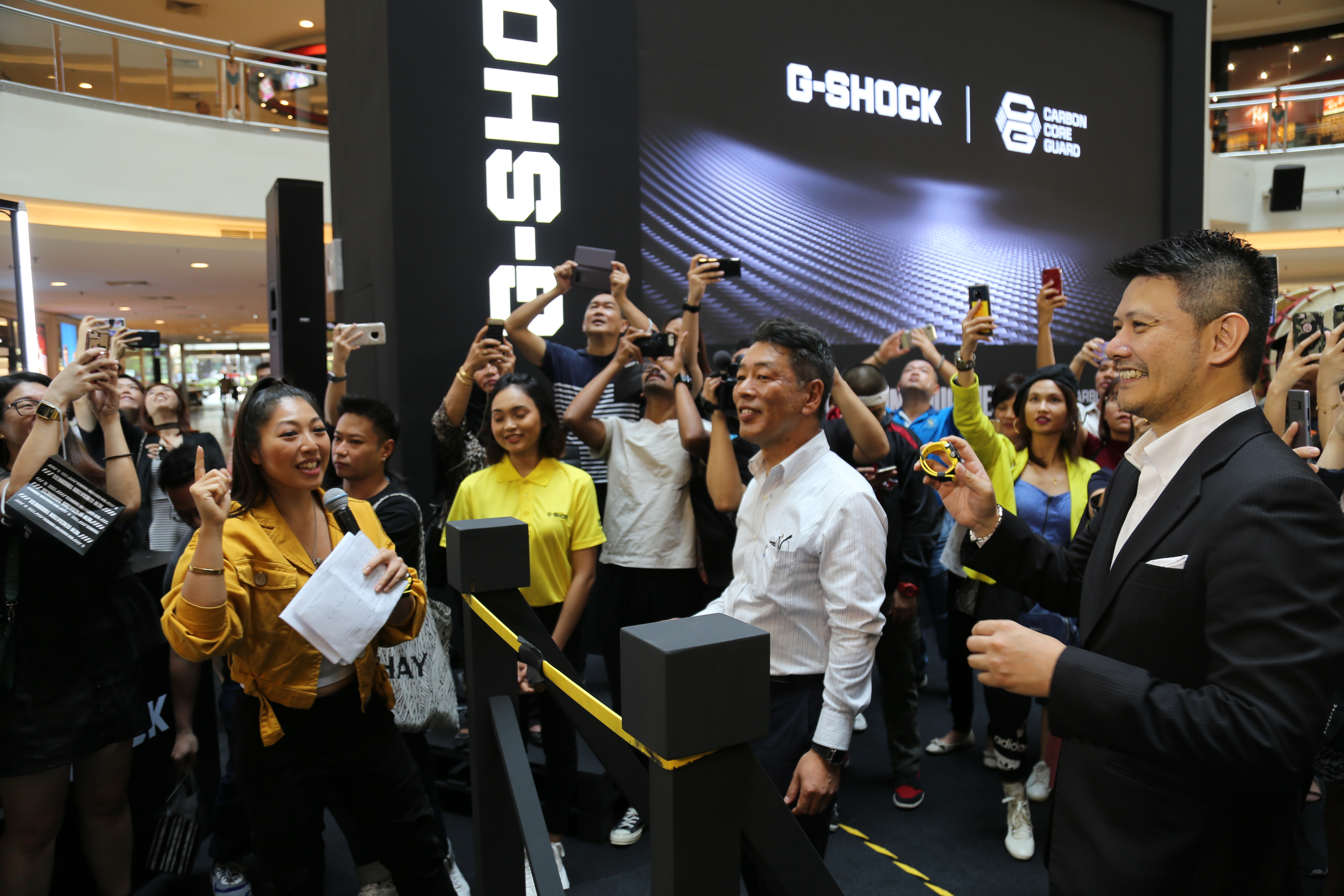 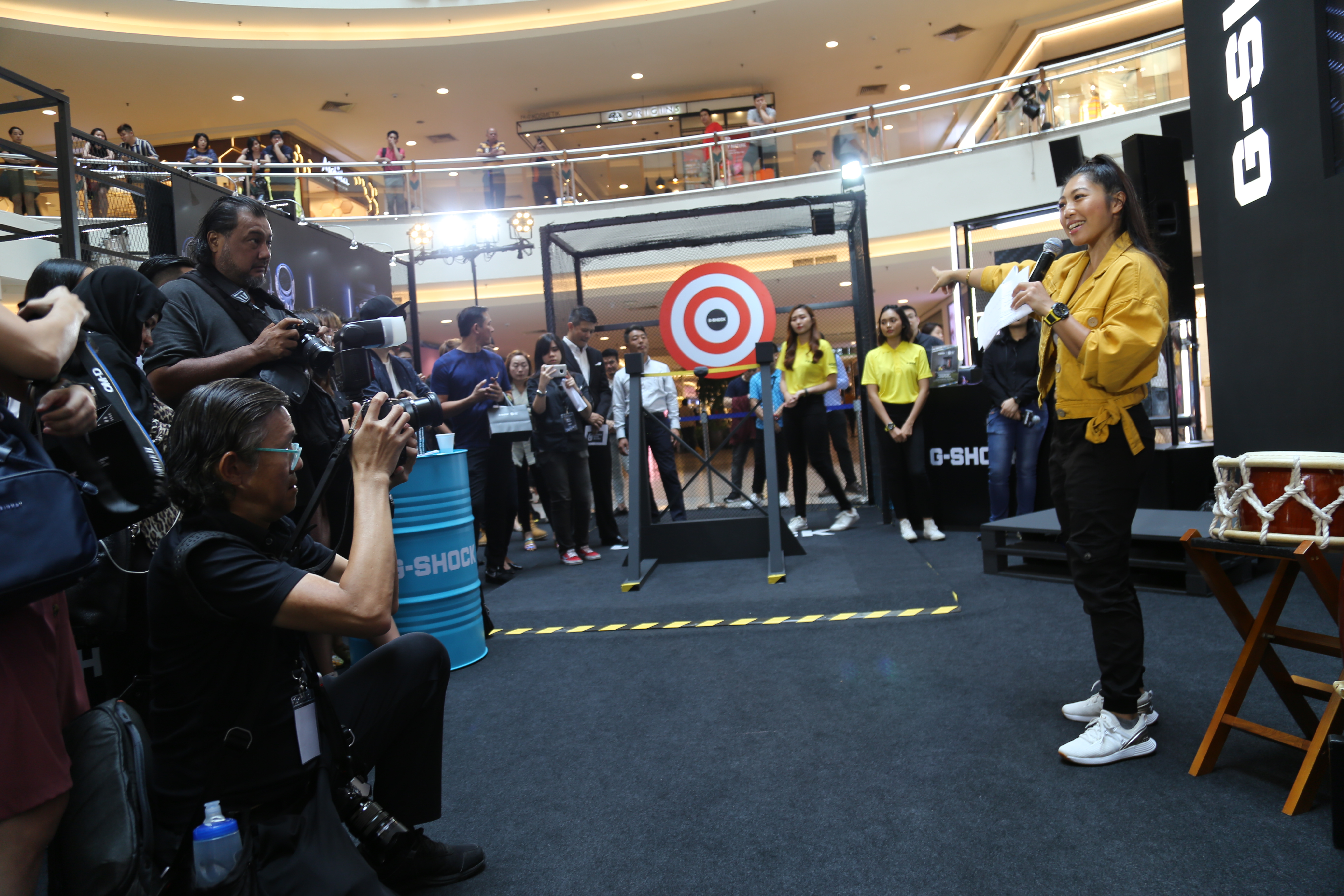 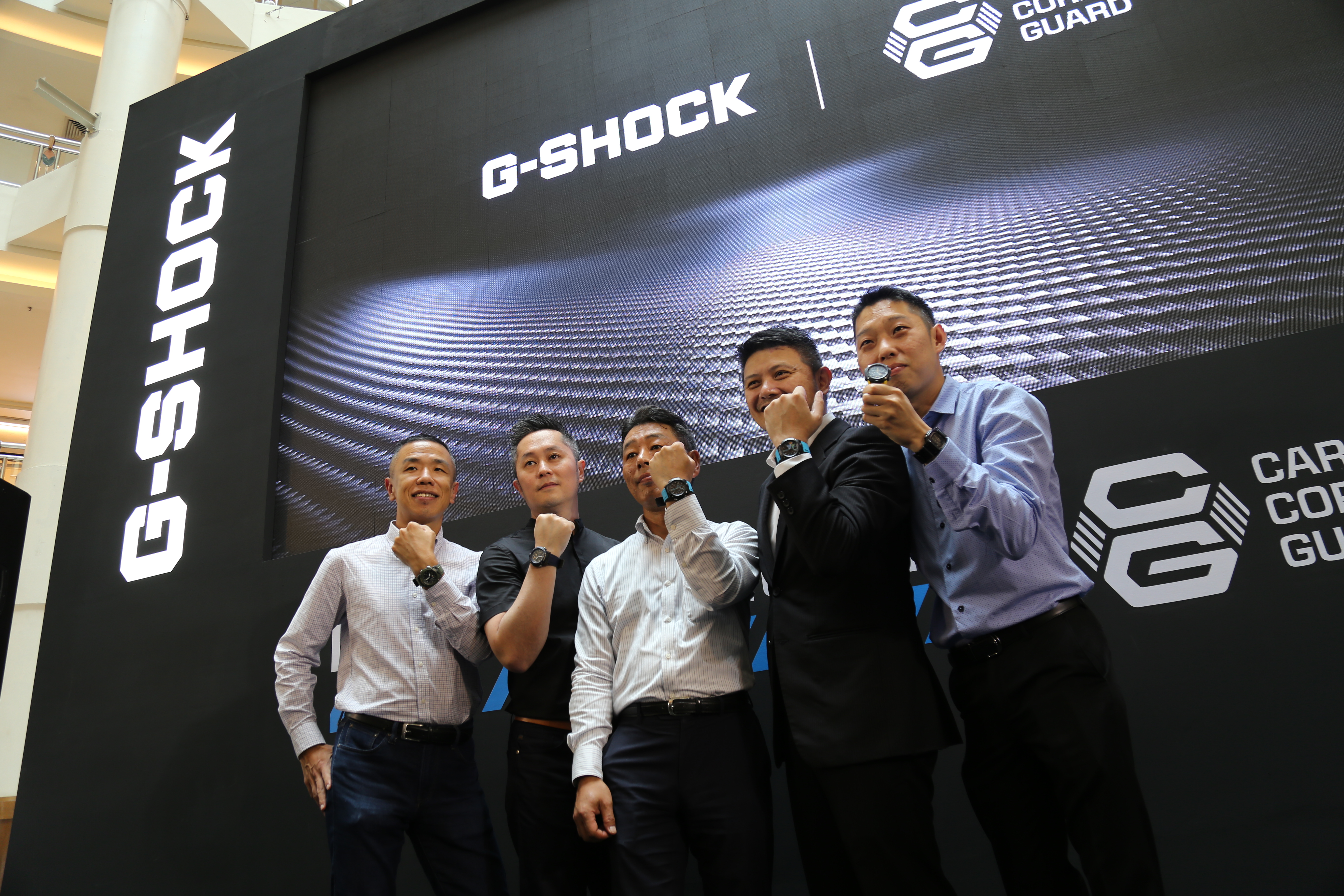 The lightest Gravitymaster ever, the GWR-B1000 Gravitymaster with a new carbon monocoque case , is incredibly though but light at the same time. Designed for the severe environtments faced by pilots, this new timepiece delievers an even higher level of  toughness through the use of the same carbon and titanium materials found on modern aircrafts. The GWR-B1000 Gravitymaster comes with an array of premium features, including 52 layers of carbon sheeting bezel, a carbon fiber insert band, and scratch resistant sapphire glass which enchances readability. The watch also utilizes tough solar technology, atomic timekeeping, Bluetooth enabled and features full auto double LEDs which automatically illuminate in dark conditions.

To commemorate Casio’s bold new direction with Carbon Core Guard, the exhibition chronicled the material evolution of Casio’s G-SHOCK from yesteryears to present day and showcase of the actual Carbon Core Guard materials used in the production of these supremely tough watches. Throughout the week-long exhibition, visitors will have the opportunity and pleasure of brutalizing the Casio G-SHOCK by participating in the Giant Slingshot- slingshot a ball towards a bullseye target which is a G-SHOCK watch. All vistors to the exhibition are encouraged to participate to stand a chance to win exciting prizes!

Mr Tezuka Itsuro, Managing Director of Casio Malaysia “When the world thought we couldn’t get any tougher, we proved otherwise today with the introduction of the G-SHOCK Carbon Core Guard series, an even more resilient watch to our already formidable G-SHOCK line.” 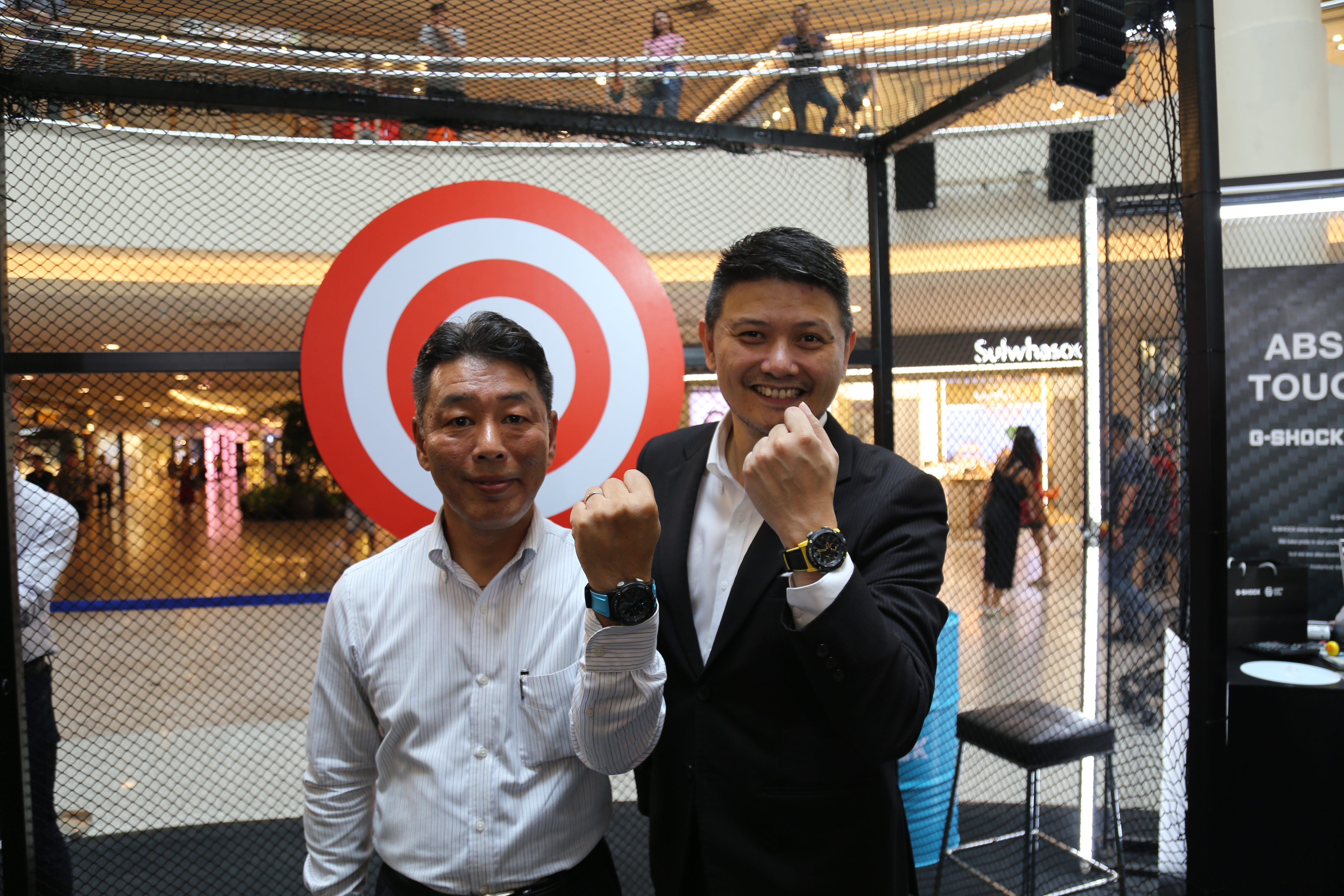 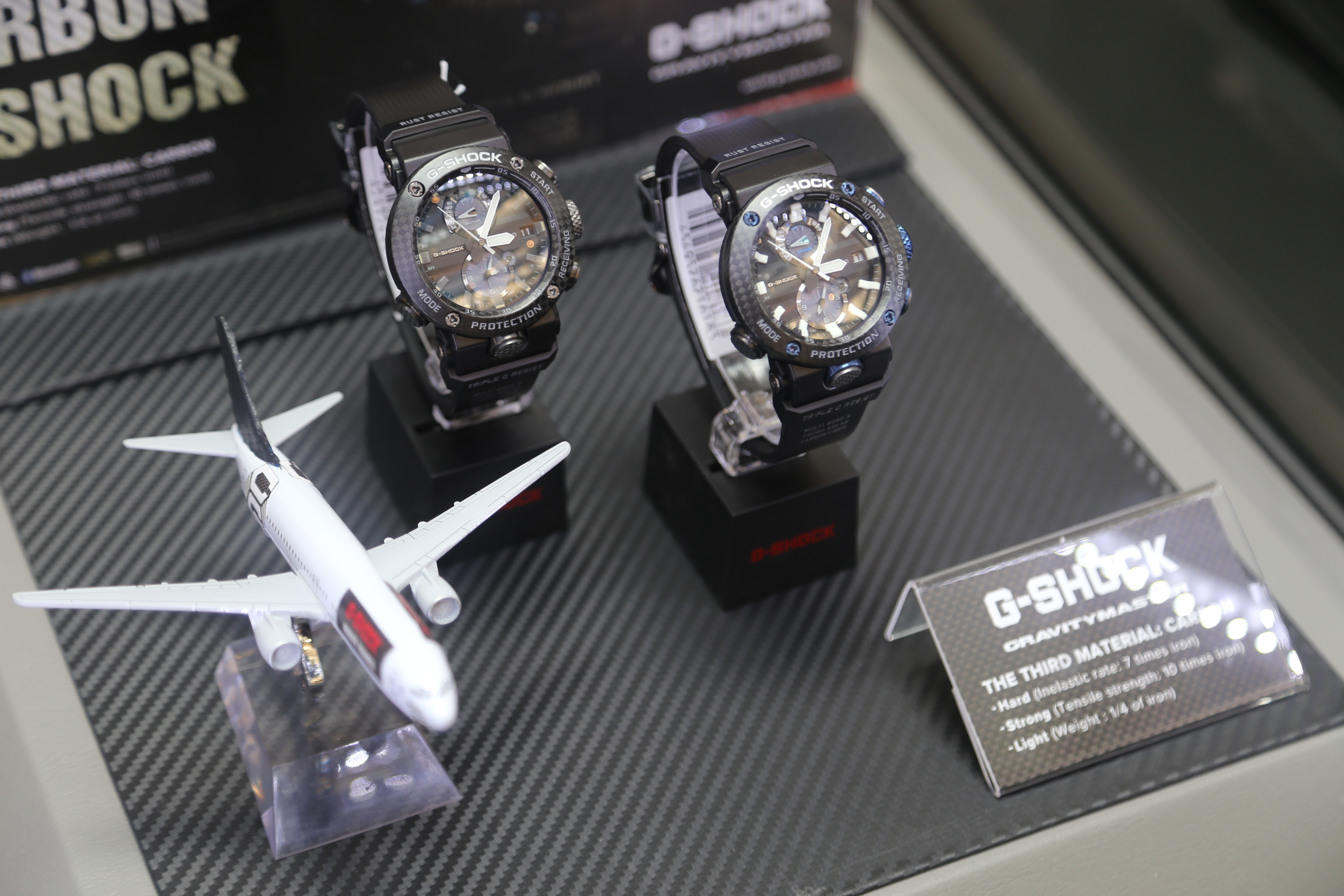 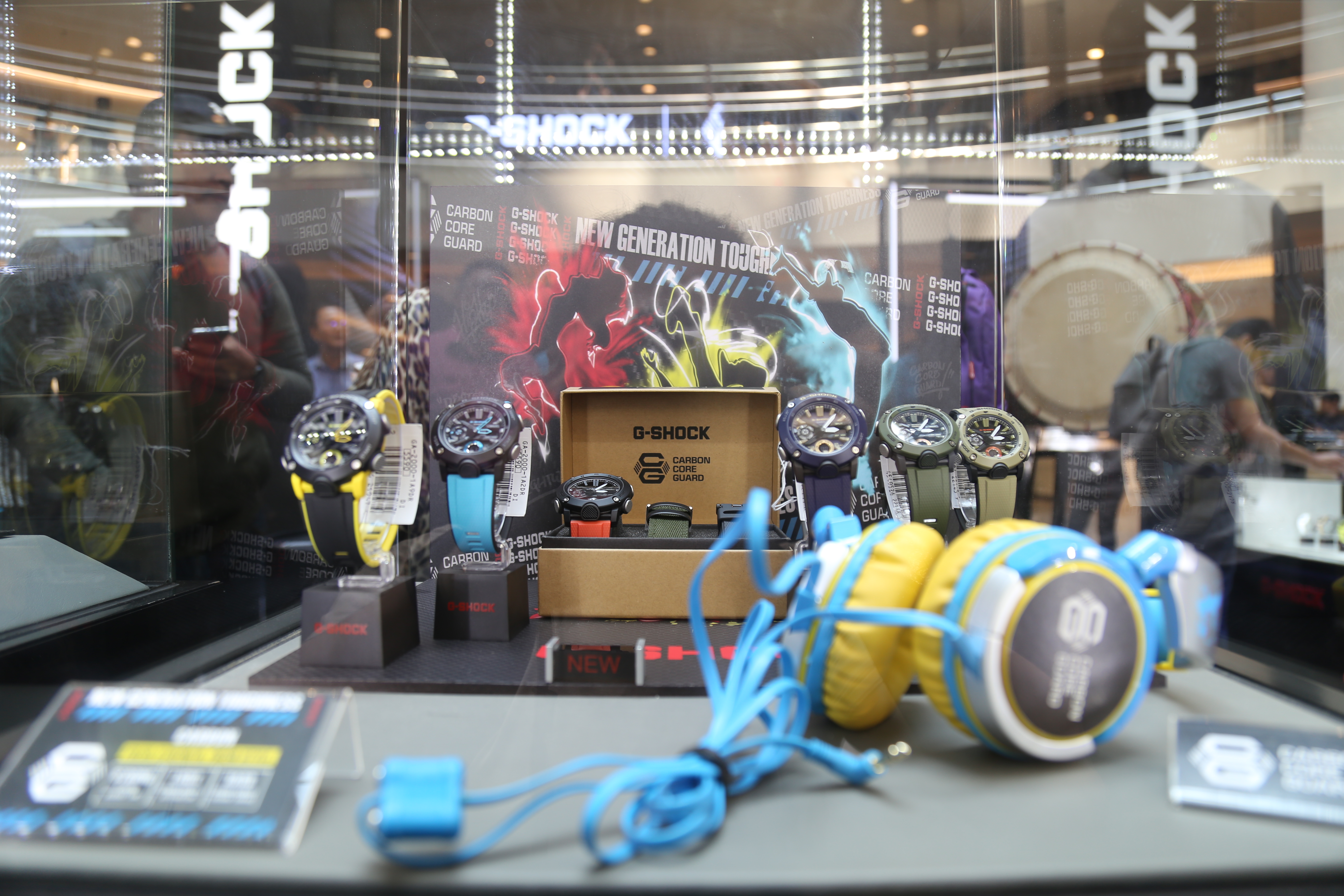 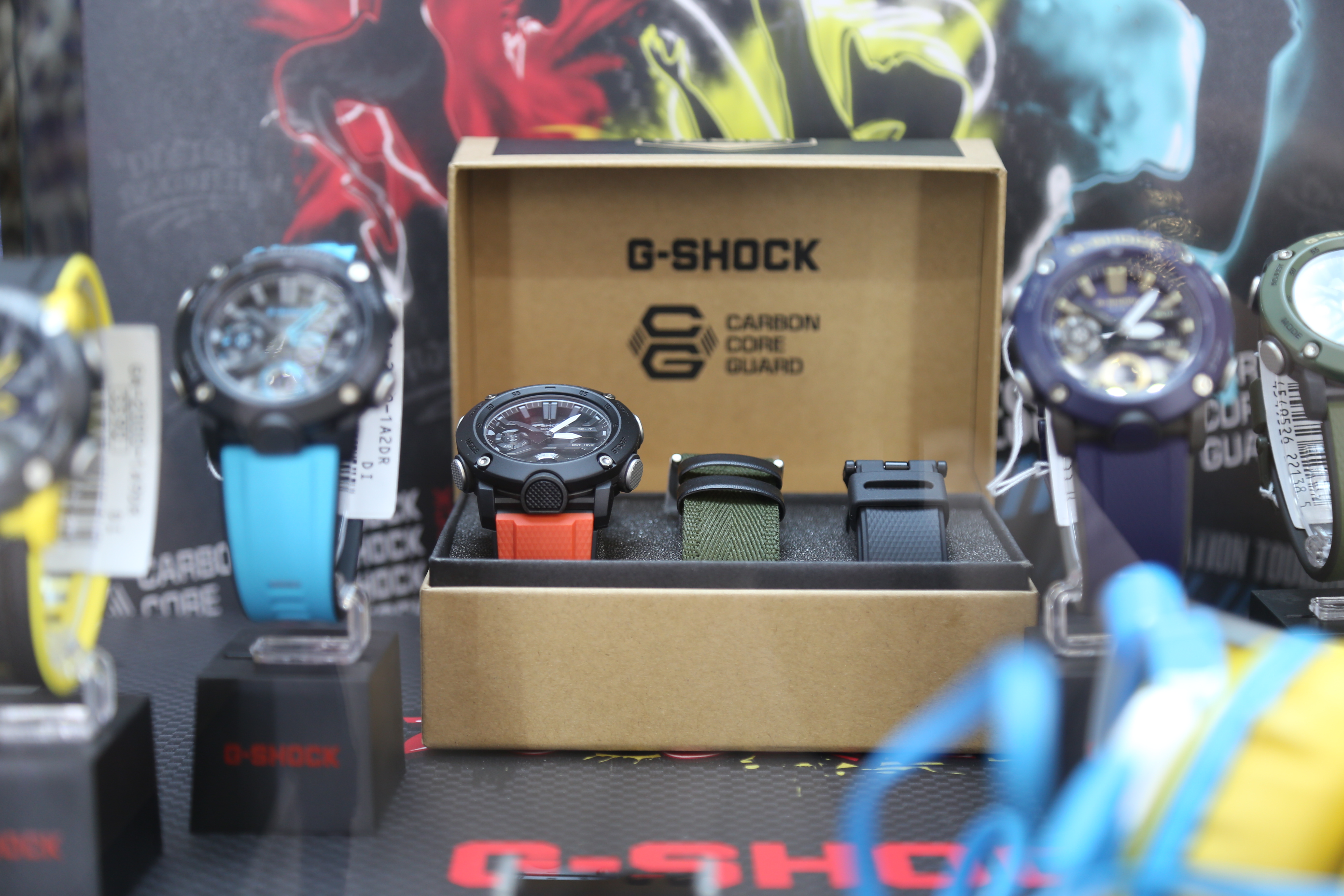 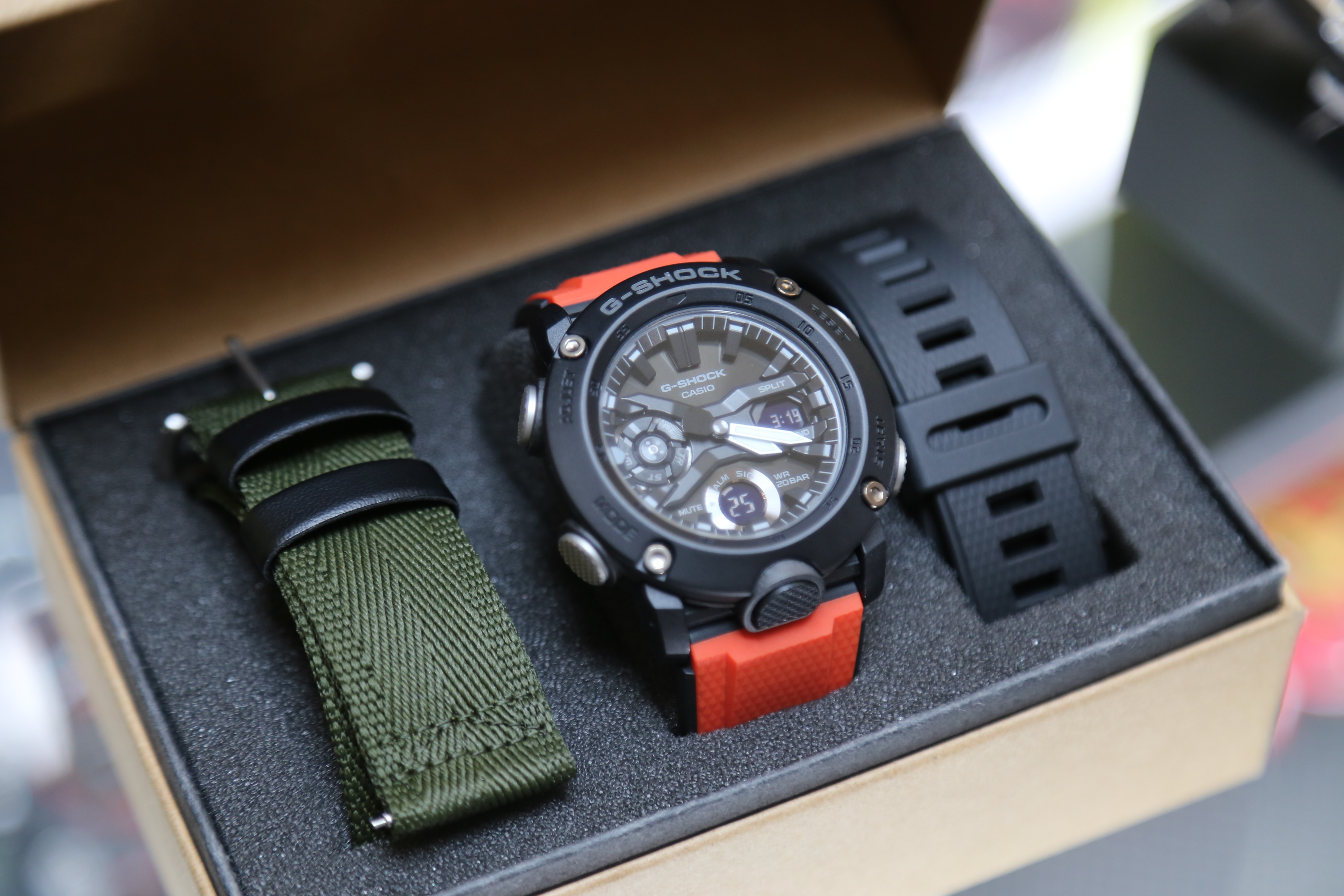