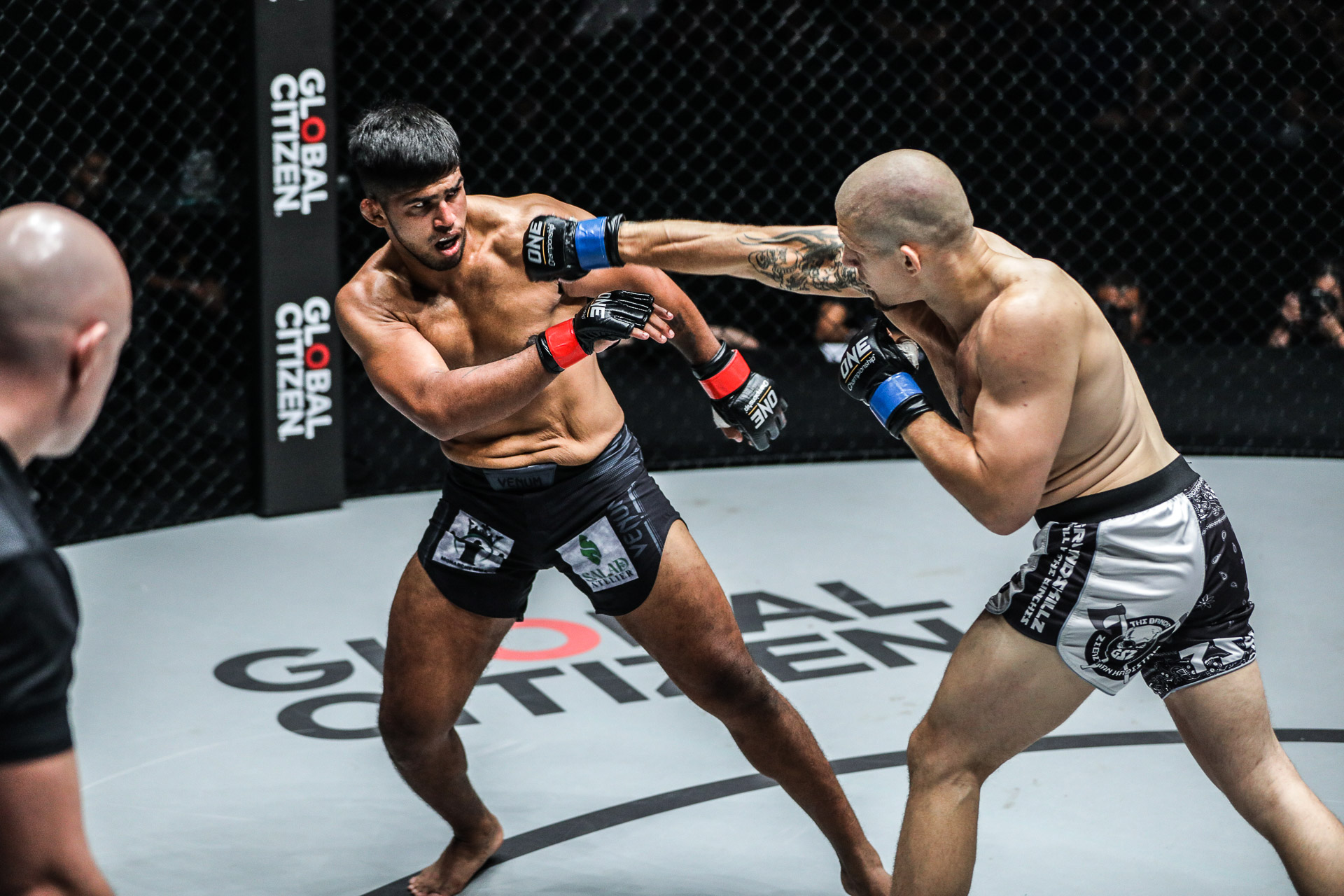 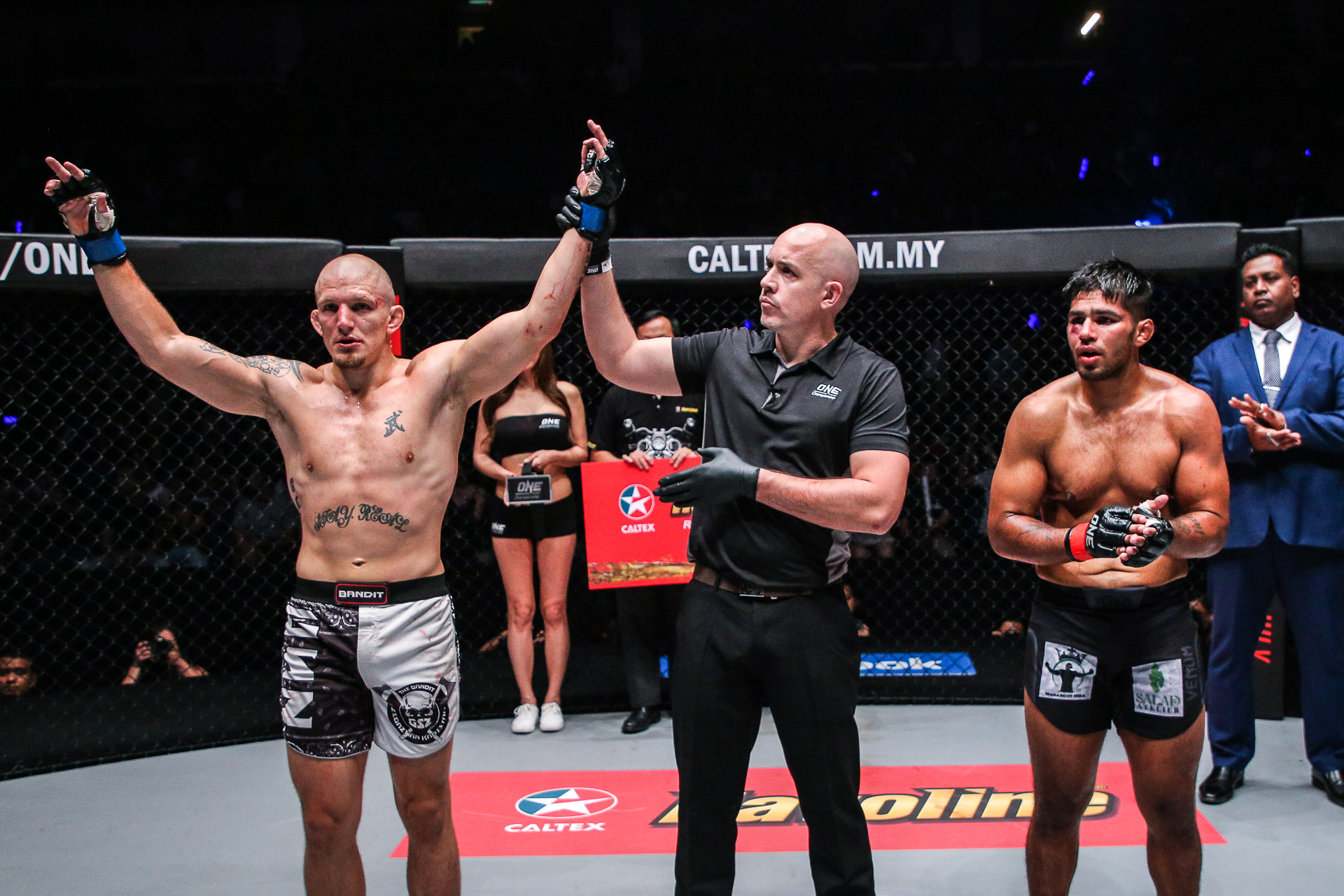 ONE Championship™ (ONE), treated fans to yet another exciting evening of world-class martial arts action. The packed Axiata Arena in Kuala Lumpur, Malaysia played host to ONE: PURSUIT OF POWER, which featured the absolute best in local and international martial arts talent. In the main event, Zebaztian “The Bandit” Kadestam of Sweden scored a rousing third-round TKO of hometown hero Agilan “Alligator” Thani of Malaysia.

“Agilan [Thani] is tough, he is really tough. I hurt my hand in the first round and I tried not to think about it. His wrestling was good and he is a tough kid. In the third round, I went back to my hand and it was good, so I said let’s go. I’ve been training hard for a long time, and this was just me flowing. Thank you to the fans in Kuala Lumpur for showing the support.” - Zebaztian Kadestam, ONE athlete 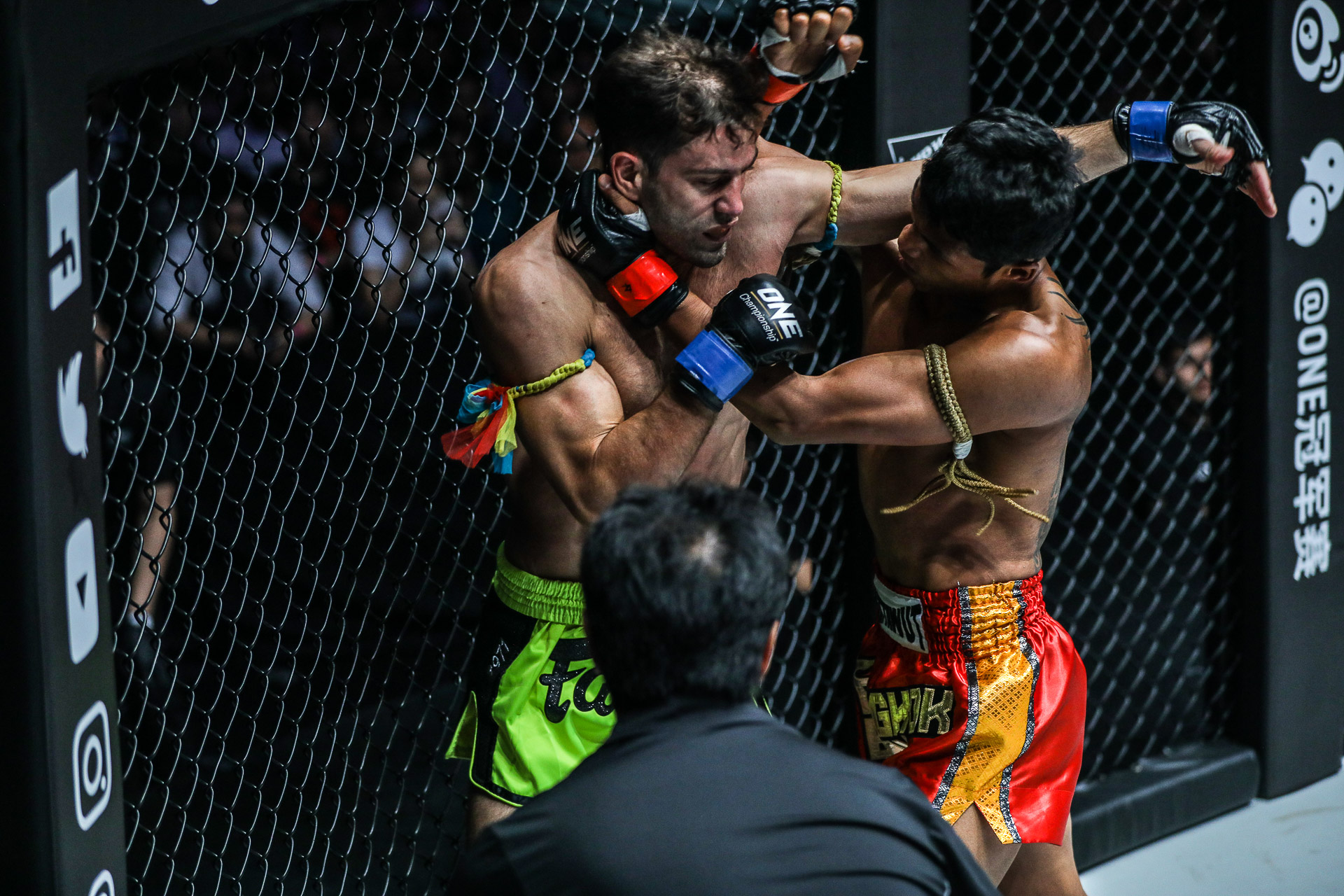 In the co-main event of the evening, “Smokin’” Jo Nattawut of Thailand redeemed himself in the highly-acclaimed ONE Super Series, shutting the lights off on French debutant Yohann Fairtex Drai in the first round. Driven to reinsert his name into the winner’s column, Nattawut relentlessly drenched Drai with piercing combinations. He scored his first knockdown in the bout when he landed a staggering right straight to the chin of Drai. With a few seconds remaining in the round, Nattawut did not hesitate to fish for the finish, firing a torrent of impactful punches and then punctuating matters with his strong right hand. The victory earned Nattawut the GoDaddy Knockout of the Night. 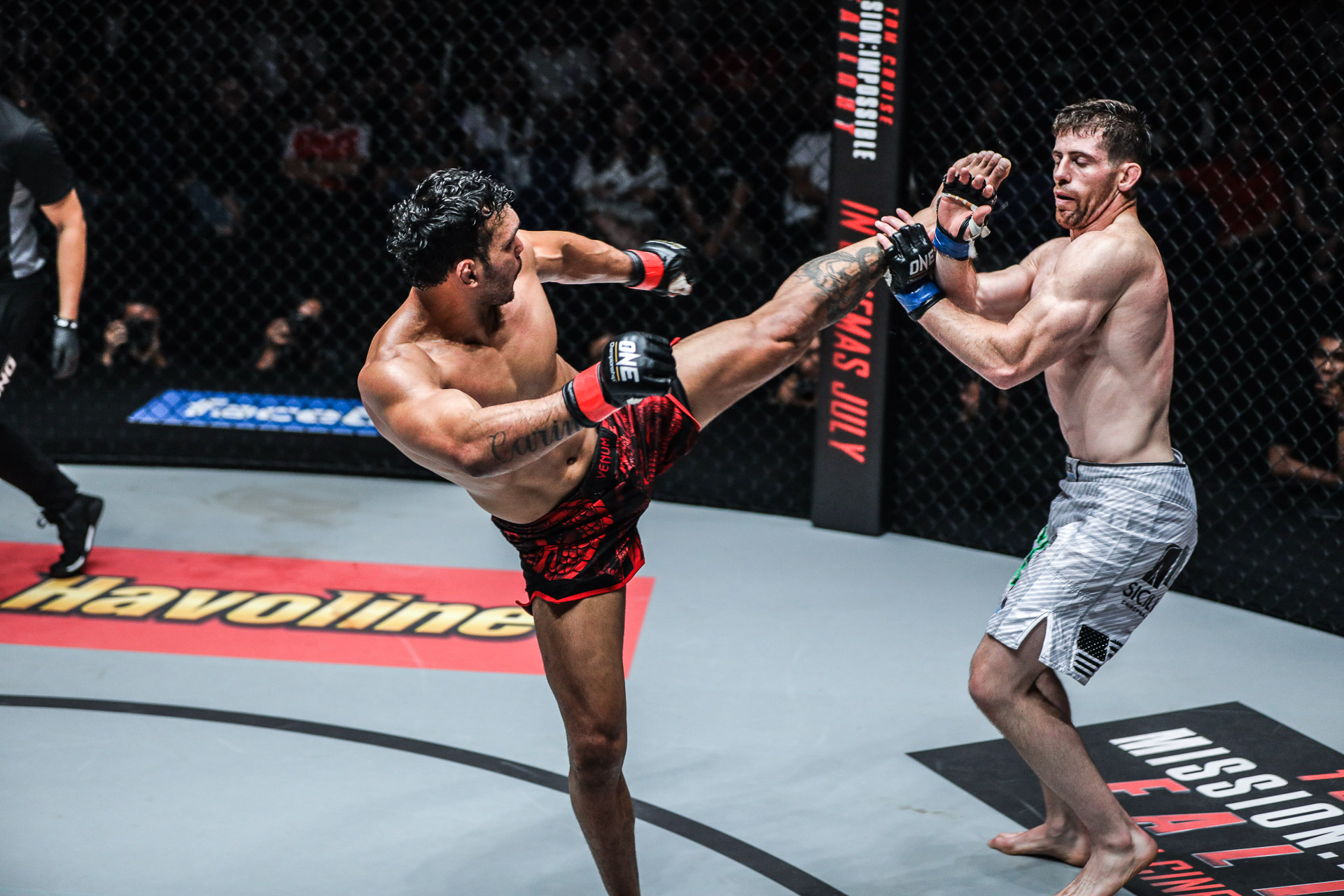 Promotional newcomer Tyler McGuire of the United States scored the biggest win of his professional career, beating former world title contender Luis “Sapo” Santos of Brazil by unanimous decision in his ONE Championship debut. Both men provided fans with a tremendous display of offense in a contest that saw the two welterweights exchanging unyielding blows and momentum-shifting takedowns for three rounds. Despite the menacing advances of Santos from bell to bell, McGuire kept his composure and boldly wrestled the dangerous Brazilian jiu-jitsu practitioner. With McGuire showing superiority in the grappling department, all three judges at cageside awarded the victory in favor of the 32-year-old undefeated American. 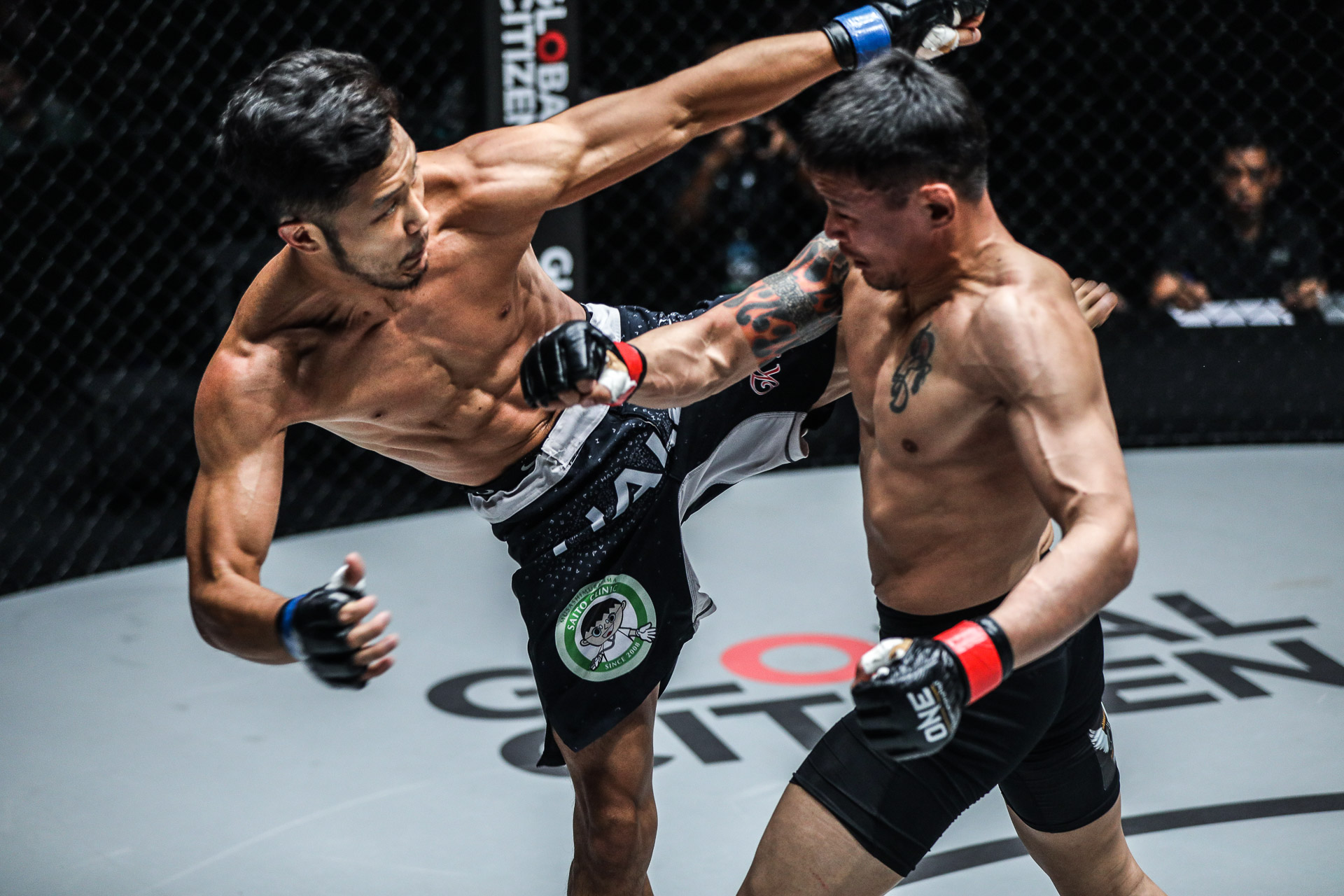 Former ONE Featherweight World Champion Narantungalag “Tungaa” Jadambaa of Mongolia made a quick turnaround, taking on Kazuki Tokudome of Japan just three weeks removed from his last bout. The 42-year-old veteran looked fresh and in peak condition, overwhelming Tokudome with his strength and power. Although Tokudome did have his moments, it wasn’t enough to alter Jadambaa’s game plan. After three rounds of dominance, Jadambaa emerged the victor, earning the judges’ nod behind a powerful striking and grappling performance. 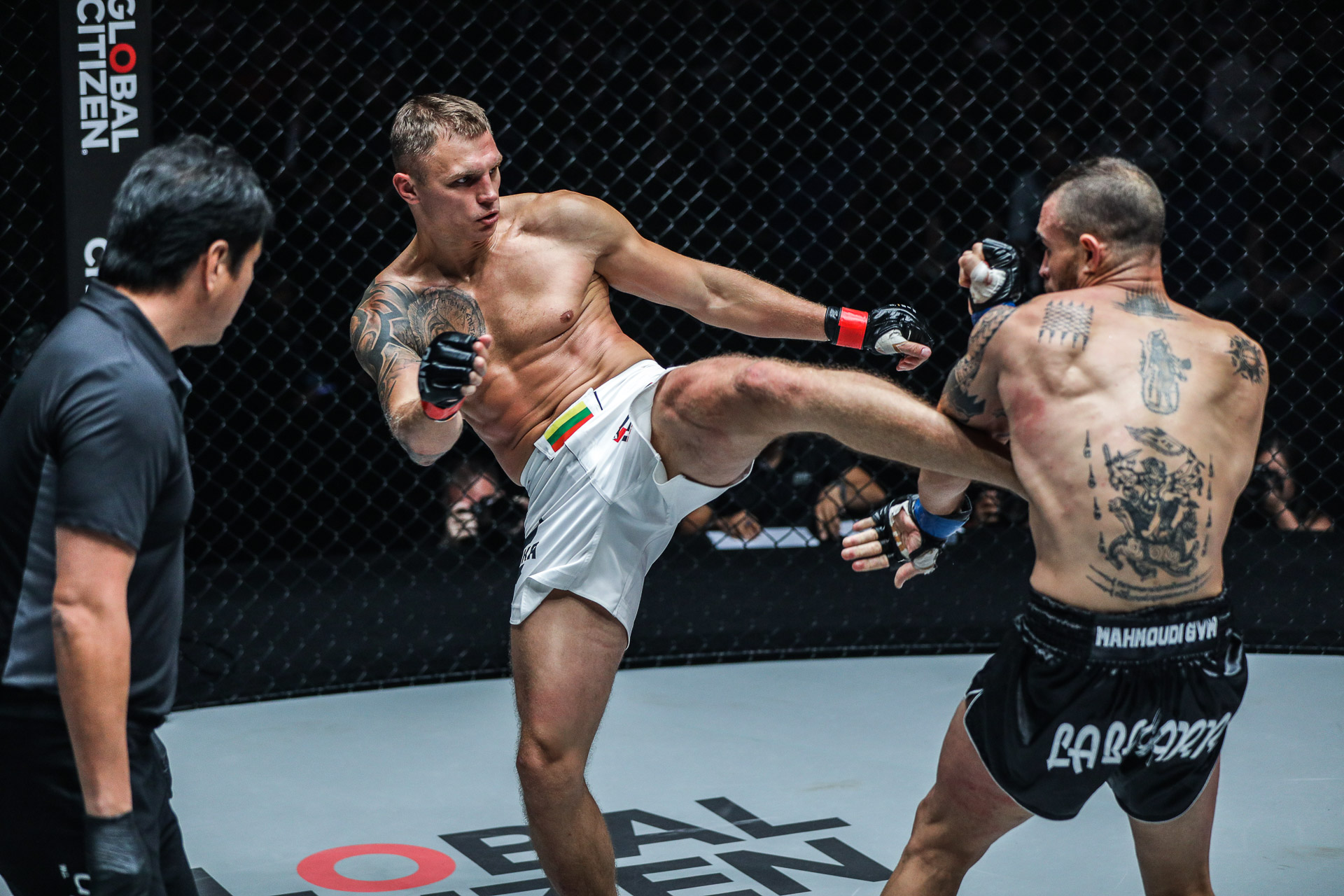 Sergej Maslobojev of Lithuania established a two-bout winning streak in ONE Super Series, outclassing French striker Florent Kaouachi in a three-round kickboxing encounter. The Lithuanian powerhouse thrilled the crowd inside the packed Axiata Arena with a captivating performance, pestering Kaouachi with a variety of furious combinations all throughout the contest. Maslobojev was able to score a knockdown in the first round with a stinging jab. He dropped his opponent again in the final frame with a hard right straight, securing a unanimous decision victory. 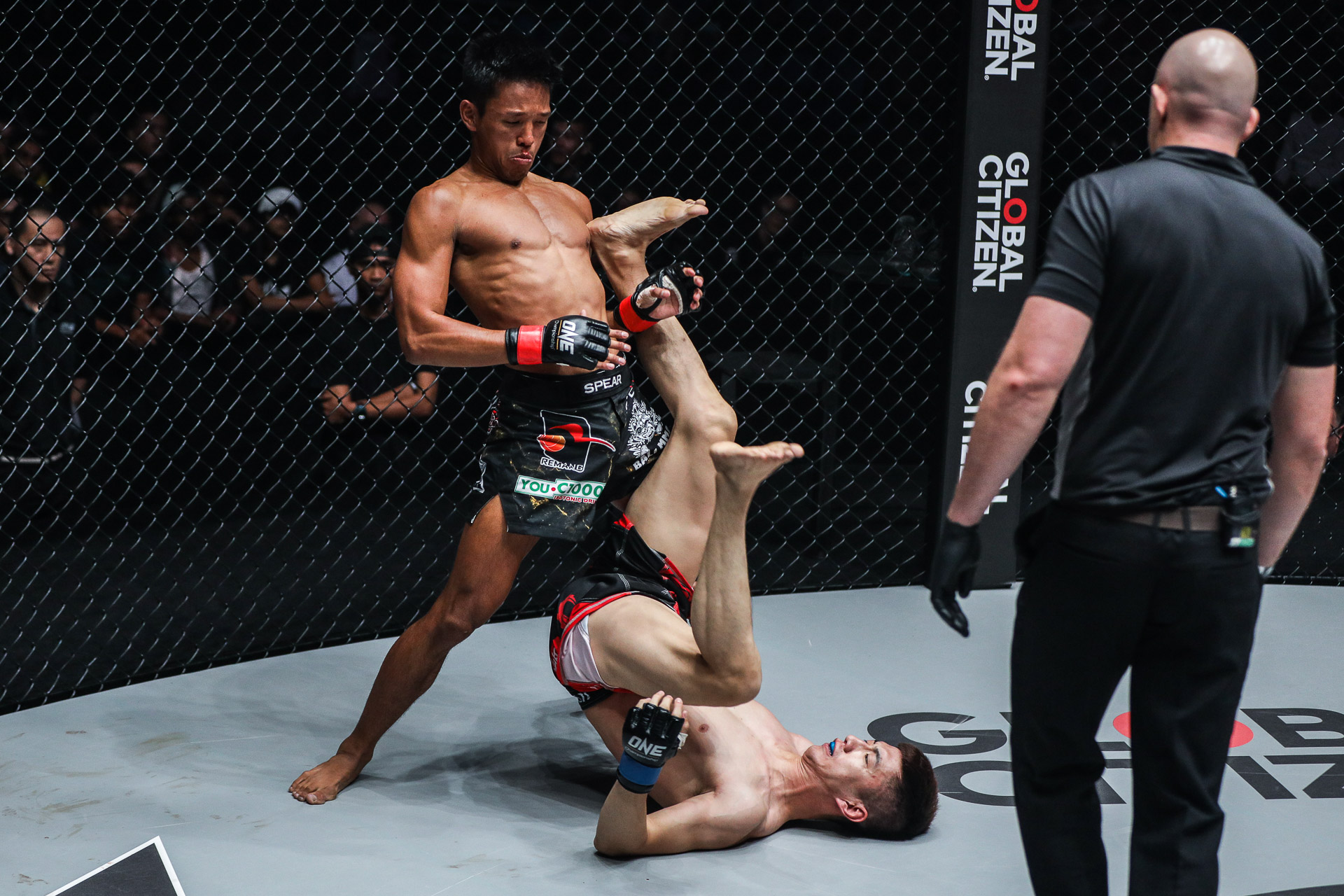 Hometown hero Keanu Subba placed himself back on the winning track, defeating Chinese featherweight prospect Xie Chao via first-round submission. Determined to walk away with the sweet victory in front of his countrymen, Subba effortlessly caught Xie with an armbar midway through the opening period. Xie exerted his best effort to defend and break the hold, but Subba applied pressure on the submission and forced the tap. 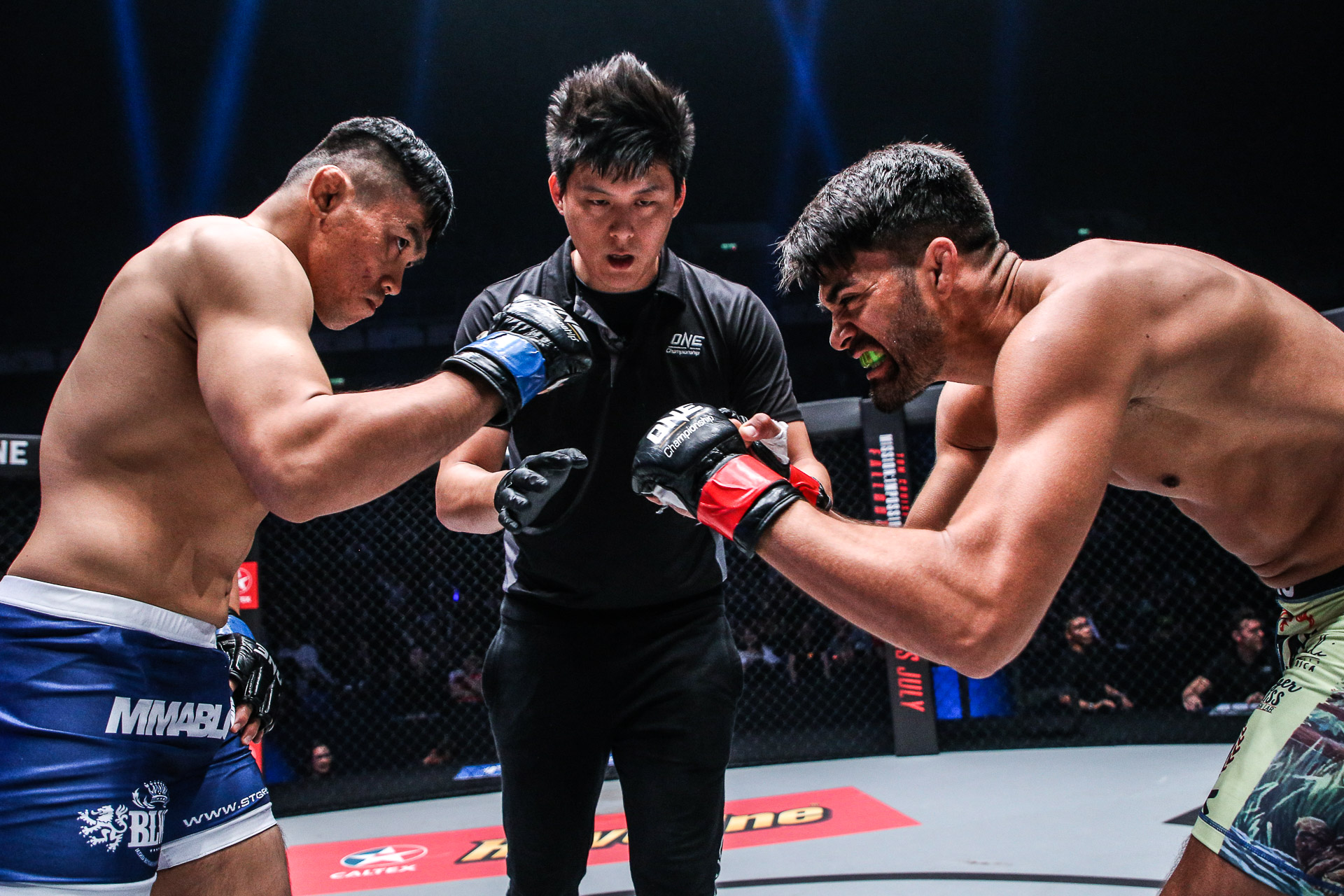 Top lightweight contender Ariel “Tarzan” Sexton of Costa Rica scored a much-needed victory, finishing Japanese stalwart Kota “Kong” Shimoishi with an impressive submission in the third round. The BJJ black belt Sexton started off the bout boxing beautifully, dropping Shimoishi in the first round with a huge right uppercut. Shimoishi recovered and came alive in the second, scoring on a series of takedowns, but Sexton dropped him again with a straight right hand at the bell. In the final round, Sexton caught Shimoishi in a reverse triangle, locked in the Americana, and forced the tap. 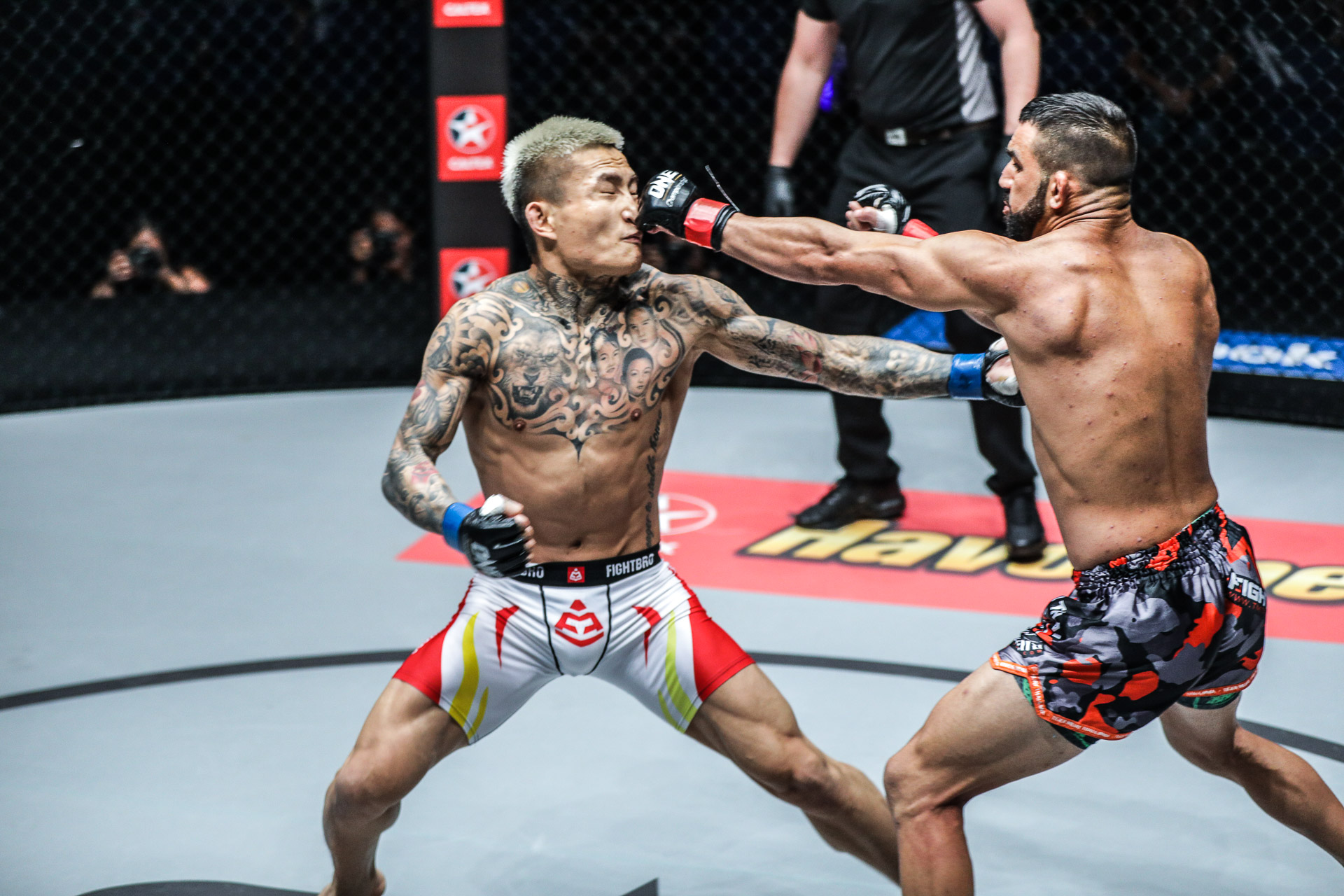 Chinese martial arts ace Li Kai Wen continued his ascent up the featherweight ranks, stopping American contender Emilio Urrutia in the third round. Li displayed his familiar power early, tagging Urrutia with sharp combinations that knocked down his opponent twice in the opening frame. Although Urrutia was able to find his groove in the second with his stinging jabs and leg kicks, Li regained the momentum in the final round, connecting on a solid right cross to drop his foe for the third time in the bout. Once Urrutia hit the canvas, Li did not stop raining down punishing blows to compel the referee to call a halt to the contest. 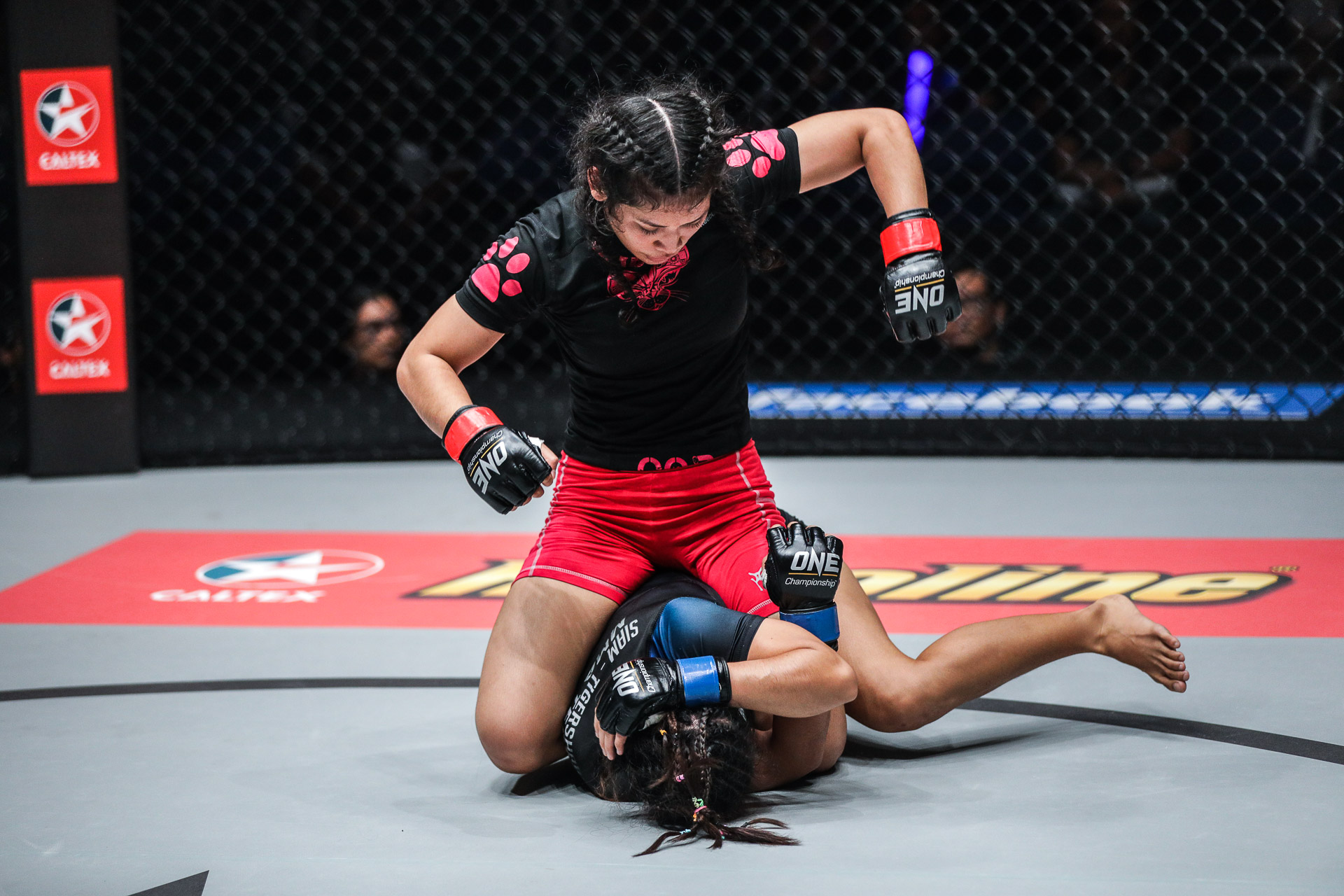 In an impressive performance, 19-year-old Malaysian martial arts prodigy Jihin “Shadow Cat” Radzuan put forth a dominant effort, earning a unanimous decision victory over Indonesia’s Priscilla Hertati Lumban Gaol after three incredible rounds of action. Radzuan stifled Gaol in the grappling department, flowing effortlessly with transitions while threatening with multiple submissions. Gaol tried her best to defend, but she could not overcome Radzuan’s relentless ground game. In the end, all three judges scored the bout in favor of Radzuan. 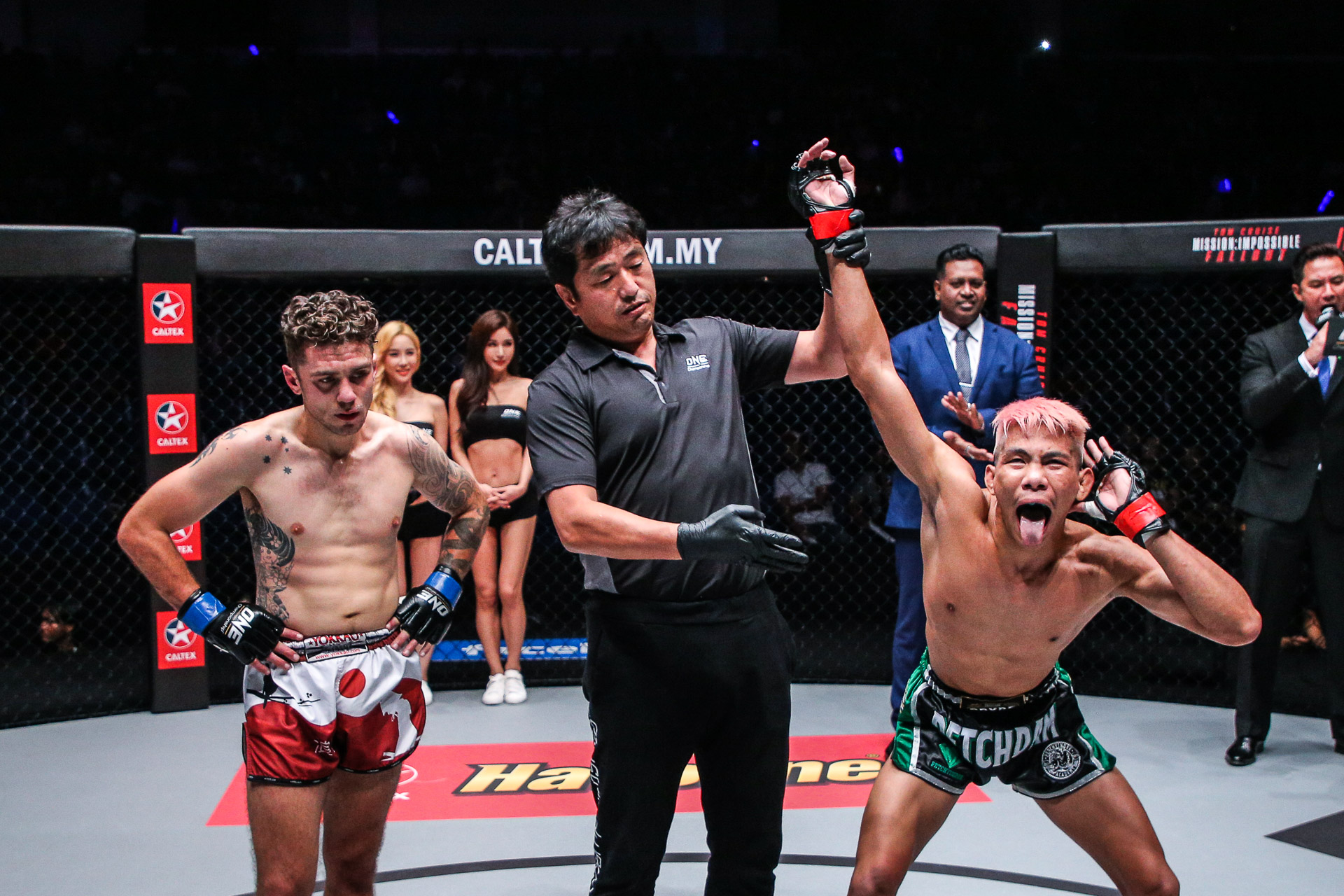 Thailand’s Petchdam Kaiyanghadao left a lasting impression in his much-awaited ONE Super Series debut, knocking out fellow debutant Josh Tonna of Australia in a Muay Thai contest. Petchdam got the job done in the second round by landing his signature left roundhouse kick before connecting with a follow-up knee to Tonna’s jaw that left the Australian on the canvas unable to recover. 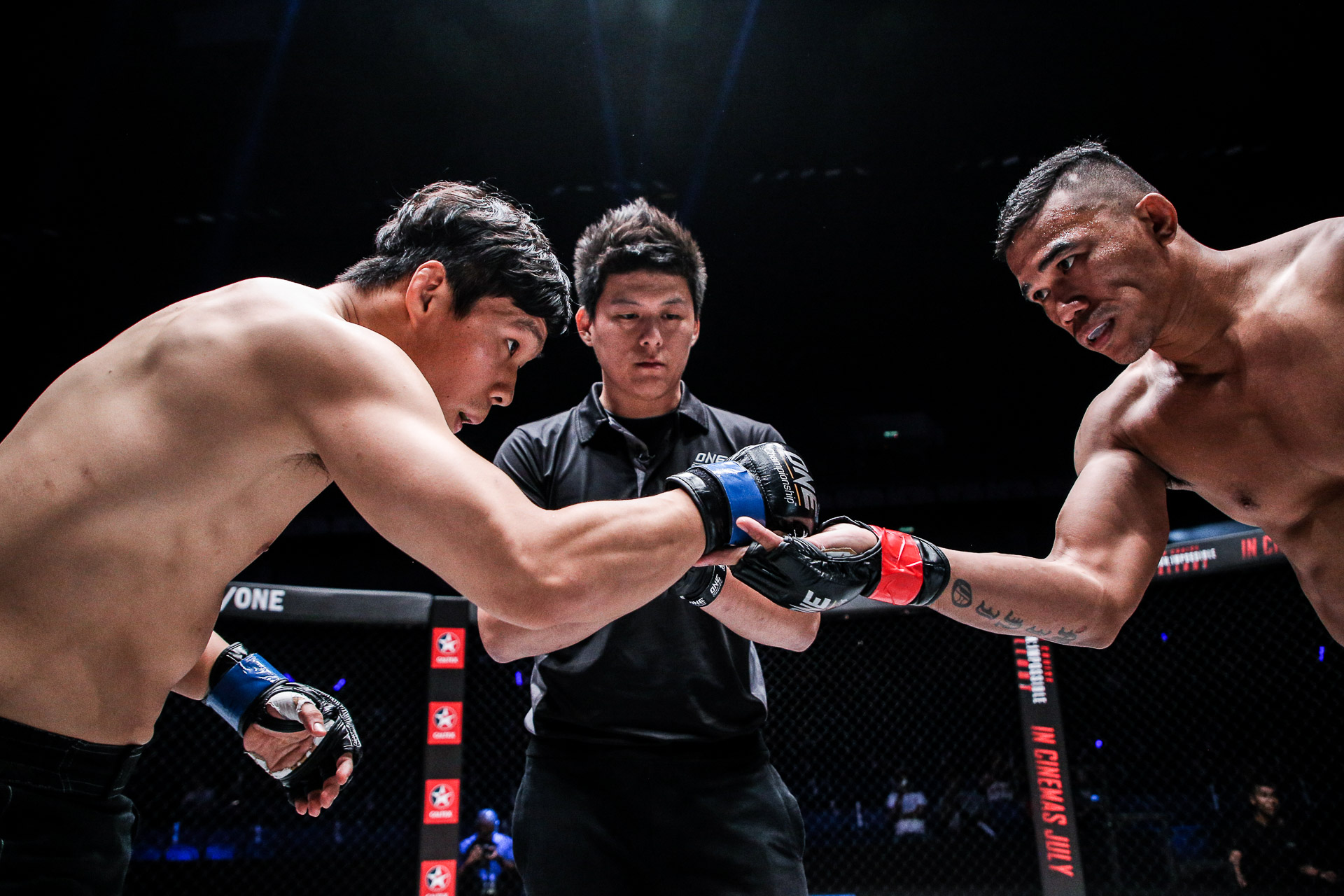 Kicking off ONE: PURSUIT OF POWER were welterweights Trestle “Jun Minion” Tan of the Philippines and “Crazy Dog” Dae Sung Park of South Korea. Park, an alumnus of Rich Franklin’s ONE Warrior Series, made his ONE Championship debut by putting together a dominant three-round performance, utilizing a plethora of takedowns and doing damage with ground-and-pound to take home a unanimous decision victory.

For more info and updates on ONE CHAMPIONSHIP, CLICK HERE