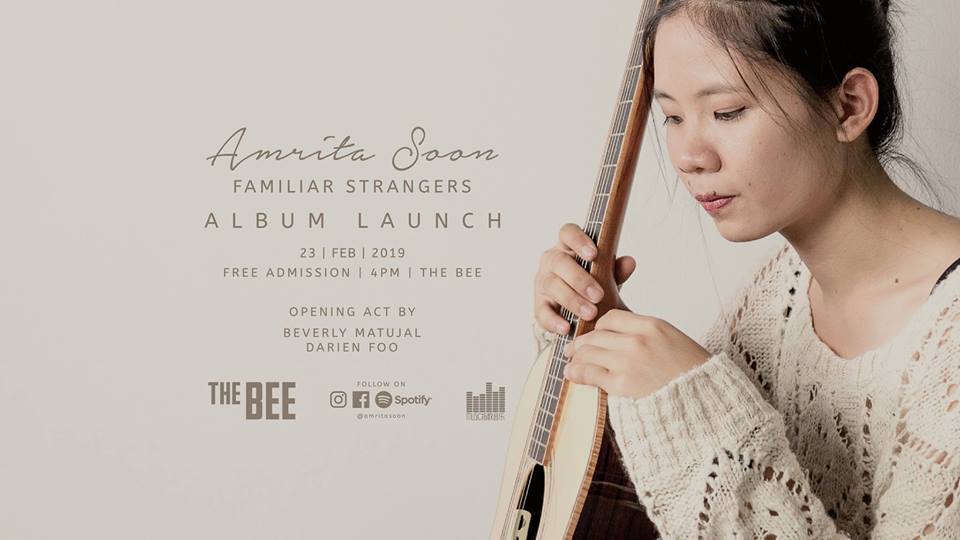 Come 23rd of February 2019, singer-songwriter Amrita Soon will officially launch her brand new album, “Familiar Strangers”, at The Bee, Publika. You can expect performances by songstress Beverly Matujal and acoustic pop tunes by Darien Foo. The party kicks off at 4pm and is scheduled to end by 7pm keeping it light and easy for everyone on a Saturday evening.

IF A STRANGER IS FAMILIAR, WOULDN’T YOU BE FRIENDS?

An introduction to “Familiar Strangers”:

Stranger danger! Not really if they’re familiar? Would a familiar stranger make you friends? Let singer-songwriter Amrita Soon answer that for you. Launching her sophomore release, cleverly titled, ‘Familiar Strangers’, which features 7 tracks including the title track as well as ’24 years’, one of her favourite songs that tells a story of her grandparents. The album also features Malaysian Idol winner, Daniel Lee on the track, ‘Untitled’. ‘Familiar Strangers’, Amrita says was inspired by the month of December. She says, ‘It’s nostalgic to be living in December. Looking back on the year, holding on to the moments that are like fading photographs. Sometimes people change and it’s like you don’t know them anymore. Sometimes you’re the one who has changed, not them; and it’s the face in the mirror you no longer recognise. We’ve become strangers now, catching glances into each other’s eyes and bringing back glimpses into what was, but isn’t anymore.’

The supporting track, ’24 years’ on the other hand is really a song about love inspired by her grandparents. ‘This song is a song about love. The kind of love that last forever and still feels like you’re falling in love for the first time. It’s about finding someone who knows you better than you do, and who can finish your sentences and someone you know you’re going to grow old with. I wrote this inspired by my grandparents, at a time when I thought love like that was only real in fairytales and movies. It was in the little things, like holding hands when they thought we weren’t looking or grandma making grandpa’s favourite meal that made me realise that sometimes the little things mean more than just saying those three words.’

Amrita’s debut release was in 2014, a 5-track EP, ‘Clues’, possibly hinting at her journey of finding clues to what the future holds for her as an artist here in Malaysia. It was an EP that was recorded in Nashville, Tennessee, USA where she had to opportunity to write with local greats like Ella Mae Bowen and Lance Carpenter. It was well received and that got her noticed by China based Malaysian production, pHMusic, which took her under their wing to produce the 2nd release. With a team of writers, producers and state of the art studio equipment, together they were able to bring ‘Familiar Strangers’ to life. This album shows a lot more maturity and is definitely a well-produced record. Imagine a young Taylor Swift when it was all chirpy and butterflies. 2019 is looking bright for Amrita Soon!

See you this 23rd February 2019, 4pm onwards at The Bee, Publika for the launch of “Familiar Strangers”!